PRICES FROM 1290 USD PER PERSON, BASED ON A GROUP OF 6 PEOPLE Vietnam from north to south is home to multiple ethnic minorities, diverse cultures, Tonkin Mountains, Halong Bay, Mekong Delta, beaches, Central Highlands. You can admire the variety of its landscapes, enjoy the hospitality and smile of the Vietnamese people by visiting the country's must-see attractions. A stroll in the heart of the terraced rice fields, a visit to the historic cities, a relaxing day on a junk will harmoniously complete your trip. Our guide and our driver will meet you at the airport and drive you to the city centre to start your trip to Vietnam. Visit the sites of the ancient capital of Tonkin: the legendary Sword Lake, the old quarter and its streets with 36 guilds, St. Joseph's Cathedral, an old house restored to its original state, the Dong Xuan market (built by the French), and the eastern gate.

In the afternoon, the visit passes through the Temple of Literature - Vietnam's first university, Tran Quoc Pagoda, Hanoi's oldest pagoda, and Quan Thanh Temple with the bronze statue of the genius (northern guardian).

The day ends with a show at the puppet theatre on the water. 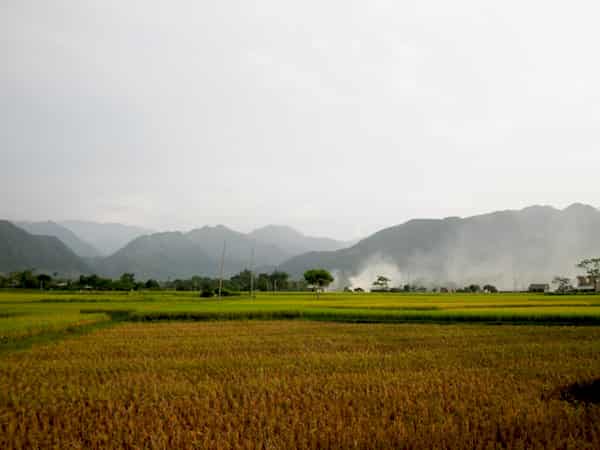 Today we are heading for the mountains of northwestern Vietnam, with the countryside offering a healthier atmosphere than in the Hanoi megapolis! The valleys and hills follow one another with rice fields, tea plantations, forests of lacquered trees.

We cross the Khe Pass (an important strategic location during the Sino-Vietnamese conflict) and then dive towards Nghia Lo located in a basin. Here, the huge orange orchards and rice fields change from green to yellow in autumn and make it one of the most famous regions for its beauty.

A short detour to the heights, in Suoi Giang, 20 km from the end of our stopover to discover infinite expanses of tea plants, the oldest of which would be 300 years old! The sunset over the mountains can be part of it!

A Thai family welcomes us in the evening to Nghia Lo for the cottage and a hearty dinner with local specialities. Dinner and overnight stay with local people. A morning walk leads us to discover some small villages in the valley, especially the one of the Thai ethnic group with its customs and daily way of life. Lunch is taken at our hosts' house and we greet them before heading back to Mu Cang Chai.

Passage through mountain passes, some at an altitude of more than 1500 m, where lovers of free flight do not hesitate to face the void (Khau Pha pass). The panorama offered to our eyes is incredible as we climb and descend successively.

Visit to the local market suggested. Dinner and overnight stay with local people. Breakfast followed by a visit to a small Thai village nearby. Continuation of our trip to Vietnam heading north. The valleys and villages follow one another with as much activity linked to the daily work of the Hmong and Thai, the majority in the region. Several passes are crossed and we can admire the mountains of the Hoang Lien chain.

Arrival in Sapa and lunch at a local restaurant. In the afternoon, walk to Y Linh Ho, Lao Chai, Ta Van and its small hamlets of the Black Hmong. Isolated locality, accessible by foot through the rice terraces so particular of Tonkin, and in fact less frequented, this walk of about 3 hours offers us a real vision of the daily life of the farmers. Overnight at the hotel. After an early breakfast, drive to Bac Ha to visit its weekly market. This Sunday market is one of the main attractions of the region: the Hmong flower, Black Dao, Phu La, Tay, Nung, Giay meet there in their traditional clothes, exchange around a glass of rice alcohol. A colourful and so "fragrant" market, with its unique scents that characterize Asia well!

Lunch in a local restaurant or with a local resident. In the afternoon, walk for more than 3 to 4 hours between the villages of Hmong, Dao and Tay of Pu Ngai Cho, Lan Gi Thang, or Thai Giang Pho. Overnight with a Tay family after a hearty meal in a friendly atmosphere. Going down from Bac Ha, detour to the village of Trung Do where the Tay ethnic group lives for a 1-2 hour walk and discover the daily activities of the local people along the Chay River. Return to Hanoi by highway in the late afternoon. Free evening and overnight at the hotel. Direction the city of Halong to discover the magnificent bay of the same name, jewel of the East Sea. Boarding on the junk around 12:30 pm. Cruise in Bai Tu Long Bay which is an extension of Halong Bay (less frequented and more authentic). We cross hundreds of karst peaks to reach Cong Do where we take a kayak ride. Then, swim and relax on one of its beaches.

On returning to the boat, a demonstration of Vietnamese cuisine before dinner. Finally, we drop anchor to spend the night in a quiet place. Tai Chi session from 6:30 am to get in shape for the early morning. Visit of a floating village in a small bamboo boat. Our junk returns to the port where a car is waiting for us to drive to Ninh Binh. Overnight at the hotel. Tam Coc, nicknamed the terrestrial Halong Bay where hundreds of karst peaks emerge from the ground and create an unusual and exceptional landscape. Boat trip on the Ngo Dong River, through caves, karst peaks and flooded rice fields. Then by bike, we reach the Bich Dong pagoda with a magnificent view of the region.

After lunch, return to Hanoi to continue your trip to Vietnam with the flight to Hue. Free evening and overnight at the hotel. This day of visit will offer us the most beautiful sites of Hue, the ancient imperial city from 1802 to 1945. A short cruise on the Perfume River jusqu´à Thien Mu Pagoda (Celestial Lady), one of the oldest Buddhist pagodas in Vietnam. Visit of the palaces, the emperors' tombs and a workshop where incense sticks are made. Free evening and overnight at the hotel. Departure for Hoi An passing the Cloudy Pass from where we can see Lang Co beach on one side and Da Nang Bay on the other. The Cham Art Museum offers us archaeological remains of the former Hindu kingdom of Champa (192-1832). At the Marble Mountain, observation of the art of stonemasons. Visit Tam Thai Pagoda and Huyen Khong Cave after climbing 150 steps.

Arriving in Hoi An, the ancient port city with Chinese and Japanese influences offers us its Japanese bridge dating from 1593, its sanctuary of Fujian (goddess protector of sailors), and its old district. Stroll to the market and along the main quay. Free evening and overnight at the hotel. Direction Danang airport 30 minutes from Hoi An to take a morning flight to Saigon. Arrival in Saigon and installation at your hotel.

The ancient Saigon, now Ho Chi Minh, a city with a rich and tormented past, nicknamed the Paris of the Far East, was the capital of French Indochina. After Dien Bien Phu and the Geneva Agreements, it became the capital of the Republic of Vietnam before the American conflict. Saigon will retain some beautiful colonial buildings, an urbanization with wide streets and influences of different cultures.

Panoramic tour of the city: the central post office (1886 - 1891, framework created by Gustave Eiffel), the Reunification Palace - the former residence of the presidents of the Republic of Vietnam (1962, architect Ngo Viet Thu, winner of the Prix de Rome in 1955), the City Hall (1898 - 1909, architect Femand Gardès), Notre Dame Cathedral (1877 - 1880, architect Jules Bourard), the pagoda of the Celestial Lady Thien Hau (built in the 18th century by Chinese merchants). You will be charmed by the styles of the Gothic novel with Indochinese or traditional Asian motifs.

Overnight at the hotel. Saigon, Ben Tre, Can Tho

After arriving in Ben Tre, this day is an opportunity to approach the Mekong Delta and enjoy a sampan ride on the Ben Tre River. Visit of a coconut candy making workshop and carpet factories. In the village of Nhon Thanh, stroll through the coconut gardens, rice fields and orchards. Tasting of honeyed tea and exotic fruits in a shaded garden. Continuation to Can Tho and overnight at the hotel. On a small boat, discover the floating market of Cai Rang (one of the most important in the delta) selling seasonal agricultural products and various everyday products.

Back at the dock, our next stop will be Sadec, the charming little town immortalized by Marguerite Duras' novel. Visit of the Lover's house and the Kien An Cung pagoda belonging to the same family.

Arrival in Saigon, dinner and rest at the hotel. Breakfast at the hotel. After your free lunch, transfer by shuttle to the airport for your departure flight. End of your trip to Vietnam.