On the way to the historical remains of Dien Bien Phu

PRICES FROM 780 USD PER PERSON, BASED ON A GROUP OF 6 PEOPLE Dien Bien Phu is a name known throughout the world thanks to the famous battle in 1954 between Viet Minh's army (led by General Vo Nguyen Giap) and French troops (by Commander Christian de Castries). The victory of the Vietnamese army put an end to French Indochina and led to the division of Vietnam into two entities: North and South. Before arriving at all the remains classified as a special national site that marks this great historical moment, we take the opportunity to discover other traces of the Indochina war and the riches of the mountains of northern Vietnam: splendid lakes, waterfalls, villages and diverse minorities await you to make your trip to Vietnam memorable. We begin this trip to Vietnam by discovering the eternal sites of Hanoi like the legendary Sword Lake (Hoan Kiem), the Ngoc Son pagoda, the old quarter and its streets with 36 guilds, the Saint-Joseph cathedral, the old merchant house restored identically, the old market Dong Xuan (built by the French), the East Gate and some pagodas.
Suggestion of visit in cyclo grows of the district of the colonial time with the School of Far East, now museum of the history of Vietnam and the Opera of Hanoi, replica of Garnier of Paris.
Night at the hotel.
Day 1: Hanoi 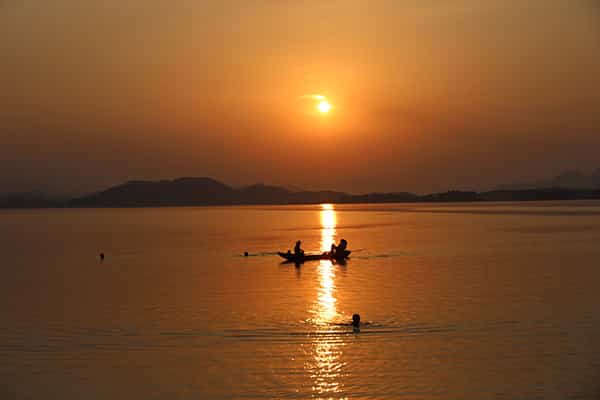 Crossing rice paddies, the Tam Dao mountain range and the Red River to reach Yen Bai. In February 1930, this city is the scene of a mutiny unleashed by students, civilians and Vietnamese soldiers against the French colonial army. This uprising is the most serious disturbance during the period of colonization.
Head to Thac Ba Lake. The road sneaks between tea plantations on the surrounding hills. Arrival in Ngoi Tu, a small village of ethnic Dao white pants.
Boat ride on Thac Ba Lake, the largest artificial water reserve in Northern Vietnam. Depending on the season (and the water level), we can discover many islands made up of countless surrounding hills.
Back to the homestay for sharing a hearty and hearty dinner, washed down with a "homemade" rice liquor!
Day 2: Hanoi, Thac Ba The awakening in flexibility, the breakfast prepared by our hosts engulfed, we take the direction of Nghia Lo further west. Here, the rice fields go from green to yellow in autumn and this magic makes it one of the regions famous for its beauty. The surrounding summits culminate at 1500m. In 1951, this town experienced a battle being one of the episodes of the Indochina war between the forces of Viet Minh and those of General de Lattre.
Small detour on the heights, to Suoi Giang to discover infinite expanses of tea trees whose oldest would be 300 years old. The sunset over the mountains can be part of it!
A Thai family welcomes us tonight for the lodge and a hearty dinner with local specialties.
Day 3: Thac Ba, Nghia Lo After thanking our host family, we continue our trip to Vietnam towards Than Uyen via Tu Le and Mu Cang Chai, a few kilometers away.
In the Tu Le Valley, from October 16 to 23, 1952, battles between Commander Bigeard's Sixth Battalion of Colonial Paratroopers and General Giap's Divisions 308 and 312 were fought.
We cross beautiful valleys of Mu Cang Chai. The landscapes are sublime: beautiful prospects, including the Khau Pha pass, rice terraces, and many ethnic villages to make stops. This passage has been classified national natural heritage. Detours on the slopes are suggested for in-depth discovery.
We then cross a higher and harder region, visibly less generous and mainly populated by the Hmong; before descending into a beautiful green valley, this time with a Thai majority, which brings us quietly to Than Uyen.
Day 4: Nghia Lo, Mu Cang Chai, Than Uyen We leave Than Uyen to begin the climb to Bac Ha. The mountain continues to offer us beautiful landscapes of valleys. Before climbing on the altitude of 1000 m to reach Bac Ha, visit the Trung Do village of the Tay ethnic group located at the edge of the river Chay.
Depending on the weather, the visit of the Hmong ethnic group to the village of Ban Pho is the highlight of our arrival. In addition, they are famous for the distillation of corn alcohol: tasting in moderation!
Dinner and overnight at a Tay family.
Day 5: Than Uyen, Bac Ha Discovering the surroundings of Bac Ha, this gives us a panoramic view of the daily activities of the locals. Numerous groves, streams, rice paddies plow our progress. The meeting of the active population at this time of day is the occasion of shared emotions.
Our walk takes again to the discovery of new villages and their inhabitants with whom we multiply the exchanges. It is more often than not that we are invited to share a cup of tea or a glass of rice alcohol!
We join Na Lo for the second night with our guests.
Day 6: Bac Ha After breakfast, we take the road to the market of Coc Ly located at the edge of the river Chay where gather ethnicities such as Hmong flower, Black Dao, Tay, Nung, Phu La. Here, the locals trade vegetables, meat, clothing, ethnic fabrics , utensils of all kinds, Chinese products, but also buffaloes and small horses.
Sapa is our destination today. Former spa resort resort created by the French, Sapa is now famous for its valley and its villages all around. Discovery of the city center with its market and church.
Free evening and night at the hotel.
Day 7: Bac Ha, Sapa 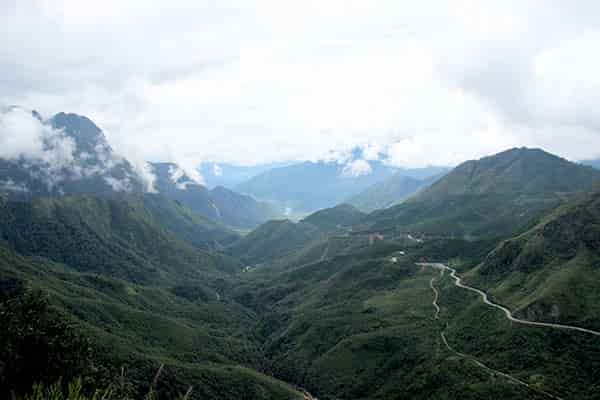 We cross the highest pass of Vietnam, Tram Ton, 1900 m altitude. If possible, stop at the Silver cascade (100 meters high). On the way, detours to visit the ethnic villages and their daily life. We can have the chance to come across the weekly market day of the region where many ethnic groups (Hmong flowers, red Hmong, Lao, Lu, Day and Dao) come to stock up and sell their local products.
Free evening and night at the hotel.
Day 8: Sapa, Lai Chau After breakfast, we arrive on a wide plateau surrounded by limestone hills at 1500 meters altitude.
We dive into the local life, closer to the inhabitants of the black Dao ethnic groups, Lao, Hmong red, Dzay ... in villages on the road to Muong Lay.
Dinner and overnight at the hotel.
Day 9: Lai Chau, Sin Ho, Muong Lay Resumed our trip to Vietnam, en route to the bowl of Dien Bien Phu.
Upon arrival, after lunch, we leave the luggage at the hotel and take a walk to discover historical sites:
Hill A1 (Eliane 2): On the eve of May 7, Vietnamese soldiers dug a tunnel to the French positions on the hill to dispose of nearly 1,000 tons of explosive and destroy the defense network. On the morning of May 7, the Vietnamese army conquers the hill, paving the way for the ultimate offensive on the headquarters of General de Castries.
General Castries HQ / Bunker: The underground HQ is located in the center of the entrenched camp. It is 20 m long and 8 m wide and has four rooms for both work and living.
Memorial of French soldiers killed in battle
Dien Bien Phu Military Cemetery
The museum of the victory of Dien Bien Phu: Its colossal halls exhibit 1,000 objects, photos and documents, reliefs, sculptures distributed according to different themes: strategic position of Dien Bien Phu, values of the victory, ...
The terrible battle of the spring of 1954 marks pathetically the history of this valley 18 km long by 6 to 8 wide, and the bell of the French presence in Indochina
Dinner and overnight at the hotel.
Day 10: Muong Lay, Dien Bien Phu Detour to the forest of Muong Phang where was the general staff of General Giap, the winner of the battle. The visit lets us imagine all the strategies put in place. On the RN 279 that we borrow for the direction of Son La, still exist Viet Minh guns that were pounding the airstrip of the basin of Dien Bien Phu.
On the long route beautifully traced through the middle mountain, we stop to visit villages of ethnic black Thai and Hmong.
Arrived at Son La, visit the former colonial penitentiary where the separatists were incarcerated. Next to it is a small museum of ethnicities of the region (Thai black, Meo, Muong) that we can also visit.
Dinner and overnight at the hotel.
Day 11: Dien Bien Phu, Son La Discovery of Hoa Binh Lake. This largest artificial water supply in the north of the country (220 km long) has a hydroelectric plant (the largest in Vietnam) that provides 40% of energy for the entire North. Picturesque lakeside villages follow one another on this pleasant and rather shady road.
In Phu Yen, the country landscapes, rice terraces, beautiful houses on stilts ... all this embellishes our journey that will lead us to the village of Doi where we spend the night.
Day 12: Son La, Moc Chau The landscape of the plateau of Moc Chau is totally singular and sometimes reminiscent of the countryside of northern Europe with its small stone walls, fruit trees and fields dotted with large rocks that give it a lunar appearance. They grow tea and raise dairy cows. We still enjoy the beautiful morning light for photos. Resumption of the road for the direction of the valley of Mai Chau which keeps us in breath!
Immersion in this huge valley of rice fields are legion, and where the local peasants are actively working. After a good lunch with the locals, we continue to Pu Luong Nature Reserve.
Day 13: Moc Chau, Pu Luong After waking up early, swimming in the waterfall early in the morning and then back to our hosts for breakfast.
Leaving Pu Luong, we see the small Thai hamlets and their bamboo wheels irrigating the fields and allowing the ethnic groups to work the rice fields. We begin small paths in the middle of the wild landscapes in the heart of the mountains on the territory of Muong.
At the entrance of village Mu, from the top of the valley, a small river flows and a waterfall with turquoise waters flows to form several basins large enough to swim eventually.
We continue the descent along the beautiful rice terraces to the village Sat. Arrival Muong homestay to eat and spend the night in their house on stilts.
Day 14: Pu Luong, Ngoc Son Ngo Luong Wake up flexibly this morning. Quiet breakfast and possibility of swimming in the waterfall. It's about getting to the local rhythm by discovering the daily activities of the inhabitants Khai, Mon and Coi Gao of this peaceful valley.
Then we greet our guests for the return to Hanoi. Departure flight, end of your trip to Vietnam or continuation in the center and south.
Day 15: Ngoc Son Ngo Luong, Hanoi